Cultural differences and/or poor linguistic validation of patient-reported outcome (PRO) instruments may result in differences in the assessment of the targeted concept across languages. In the context of multinational clinical trials, these measurement differences may add noise and potentially measurement bias to treatment effect estimation. Our objective was to explore the potential effect on treatment effect estimation of the “contamination” of a cultural subgroup by a flawed PRO measurement.

Even if differences between the expected and observed power were small, some substantial differences were obtained (up to a 0.375 point drop in power). No situation was systematically protected against loss of power.

The impact of poor PRO measurement in a cultural subgroup may induce a notable drop in the study power and consequently reduce the chance of showing an actual treatment effect. These results illustrate the importance of the efforts to optimize conceptual and linguistic equivalence of PRO measures when pooling data in international clinical trials.
volgende artikel Examining unidimensionality and improving reliability for the eight subscales of the SF-36 in opioid-dependent patients using Rasch analysis 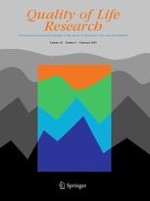 The Caregiver Quality of Life Index–Cancer (CQOLC) in Singapore: a new preliminary factor structure for caregivers of ambulatory patients with cancer

Intimate partner violence and health-related quality of life in European men and women: findings from the DOVE study