A web-based survey was simultaneously conducted in the UK (n = 1509), France (1501), and Germany (1502). Along with the PROMIS Profile 29, we collected sociodemographic information as well as the EQ-5D. We tested measurement invariance by means of multigroup confirmatory factor analysis (CFA). Differences in the health-related quality of life between countries were modeled by linear regression analysis. We present general population reference data for the included PROMIS domains utilizing plausible value imputation and quantile regression.

Multigroup CFA of the PROMIS Profile 29 showed that factor means are insensitive to potential measurement bias except in one item. We observed significant differences in patient-reported health between countries, which could be partially explained by the differences in overall ratings of health. The physical function and pain interference scales showed considerable floor effects in the normal population in all countries.

Scores derived from the PROMIS Profile 29 are largely comparable across the UK, France, and Germany. Due to the use of plausible value imputation, the presented general population reference values can be compared to data collected with other PROMIS short forms or computer-adaptive tests.
vorige artikel The relationship between exercise dose and health-related quality of life with a phase III cardiac rehabilitation program
volgende artikel Measurement invariance of the WHOQOL-AGE questionnaire across three European countries 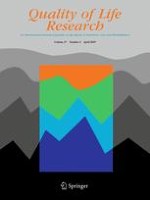