Existing trait mindfulness scales primarily assess mindfulness as it occurs outside interpersonal contexts. To more fully understand the possible relational benefits of mindfulness, the authors propose the construct of interpersonal mindfulness—mindfulness as it occurs during interpersonal interactions. The current work describes psychometric development and evaluation of an individual difference measure of interpersonal mindfulness, the interpersonal mindfulness scale (IMS). Exploratory and confirmatory multigroup factor analyses across five independent samples (N = 2085) revealed a hierarchical solution in which four first-order factors were components of a single higher-order interpersonal mindfulness factor. The four resulting subscales were named Presence, Awareness of Self and Others, Nonjudgmental Acceptance, and Nonreactivity. Study 2 showed acceptable test–retest reliability of the IMS over a 1-month period, and study 3 revealed that, among experienced meditation practitioners, greater years of meditation practice, frequency of meditation practice, and number of meditation retreats attended were associated with higher IMS scores. Study 4 provided evidence for convergent, discriminant, and incremental validity of the IMS using partial correlations, partialling out the shared variance of trait mindfulness, with intrapersonal, interpersonal, and relationship functioning variables. The value of this measure and construct for stimulating future research on the social consequences of being mindful while interacting with others is discussed with special regard to understanding the context of healthy relationships. 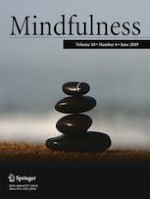 How Mindfulness Came to Plunge into Its Objects

Does Rumination Function as a Longitudinal Mediator Between Mindfulness and Depression?

Anxiety and Stress-Related Disorders and Mindfulness-Based Interventions: a Systematic Review and Multilevel Meta-analysis and Meta-Regression of Multiple Outcomes

Commentary Regarding Wilson et al. (2018) “Effectiveness of ‘Self-Compassion’ Related Therapies: a Systematic Review and Meta-analysis.” All Is Not as It Seems