Current research points to occasional problems experienced by practitioners of the immeasurable or boundless states. From a historical perspective, the standard mode of teaching these by way of directing specific thoughts to a particular set of individuals is a later development in the Buddhist traditions, not attested in the early texts. Instead of being the sole way of teaching the cultivation of positive mental attitudes like mettā and compassion, alternative approaches could be developed based on Buddhist canonical precedents that are less demanding in cognitive effort and closer in kind to the cultivation of mindfulness. In fact, mindfulness relates to mettā and compassion in various ways, which reflects its multifunctionality in early Buddhist meditation theory.
vorige artikel A Randomized Trial of Mindfulness-Based Cognitive Therapy with Psoriasis Patients
volgende artikel Evaluating the Factor Structure of Each Facet of the Five Facet Mindfulness Questionnaire 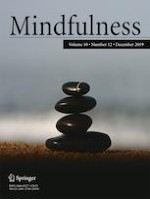 Examining the Link Between Mindfulness and Temporal Perspective