Adolescence is a critical period for sexual development, and previous research demonstrates that school cultures play an important role in shaping adolescent sexual behavior. However, little is known about the role of school context for developing sexual attitudes and sexual sense of self. This study explores how sexual cultures that emerge within high schools shape the sexual development of young women during the transition to adulthood. Using three waves of data from the National Longitudinal Study of Adolescent to Adult Health, a sample of 9th to 12th graders in U.S. schools in 1994–1995 who were surveyed in 1996 and in 2001 when they were 20 to 26 years old (N = 1,017), this study measures school sexual cultures using the aggregated sexual beliefs and behaviors of students within the school. Multilevel analyses are used to explore the association between these school sexual cultures and young women’s sexual attitudes (perceived obstacles to using birth control, guilt and shame about sex, and expectations of sexual pleasure) in adolescence and their sexual experiences (equal initiation of sex with partner and frequent orgasm with partner) in adulthood. Overall, the results suggest that schools play an important role in young women’s developing attitudes toward sex and contraception. High school sexual cultures are also associated with young women’s sexual behavior in adult heterosexual relationships, as young women who attended schools with students who had higher levels of religious attendance or guilt and shame about sex were less likely to report being an equal initiator in their adult relationships. However, the relatively small impact of high school sexual cultures on young women’s sexual experiences in adulthood, particularly in terms of sexual pleasure, suggests that more proximal contexts and relationships may play a more significant role in shaping their current sexual behaviors. 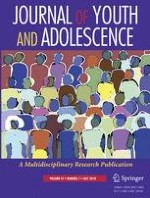 Parenting, Communication about Sexuality, and the Development of Adolescent Womens’ Sexual Agency: A Longitudinal Assessment

Fear of Negative Evaluation and Weight/Shape Concerns among Adolescents: The Moderating Effects of Gender and Weight Status

BodiMojo: Efficacy of a Mobile-Based Intervention in Improving Body Image and Self-Compassion among Adolescents

Ashley Nellis: A Return to Justice: Rethinking Our Approach to Juveniles in the System