In the last three decades, mindfulness-based interventions and mindfulness as a general principle and practice have kindled a rapidly growing scientific interest. This interest has manifested in multiple forms and research programs according to the various traditions in philosophy, neuroscience, medicine, psychology, and other fields of science. One of these endeavors has been the quantitative assessment of “mindfulness” as a psychological state or trait. Utilizing the most common method of psychological assessment by questionnaires, various mindfulness questionnaires based on self-rating were developed. This enterprise has encountered great interest and adaption in empirical research. Nonetheless, mindfulness questionnaires have also encountered fundamental criticism, sometimes from researches who pioneered this field (Grossman 2008; Grossman and Van Dam 2011). Grossman ( 2008) identified six critical issues related to the self-rating of mindfulness: (1) conceptual difficulties; (2) potential biases of inventory developers (e.g., relatively modest level of experience in mindfulness practice and Buddhist psychological theory); (3) differences in semantic understanding of mindfulness items in respondents, depending on their level of experience with mindfulness practice; (4) potential discrepancies between self-ratings and “real mindfulness”; (5) biases in ratings stemming from long-term practice or the participation in mindfulness-based interventions and, as a consequence of these problems, (6) difficulties in the validation of mindfulness scales. …
volgende artikel Assessment of Mindfulness: Review on State of the Art 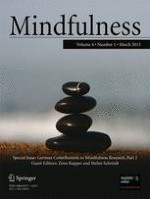