We conduct a cross-sectional study to examine gender differences in the organizational structure of irrational/rational beliefs in the symptoms of depression in a sample of undergraduate students (N = 476). The findings suggest that the psychological distress and health models of REBT are valid for both genders. The demandingness, as the primary irrational belief process, indirectly predicts depressive symptoms through the secondary irrational belief process (awfulizing) for both males and females. However, there are some gender differences. Frustration intolerance has a unique contribution to the symptoms of depressive for males, while global evaluation of self plays a vital role in the relationship between demandingness and depressive symptoms for females. Regarding the psychological health model, findings suggest that the primary rational belief process (preference) predicts the symptoms of depression through secondary rational belief processes (non-awfulizing) for both genders. However, unconditional self-acceptance beliefs play a significant role in this relationship only for women. Furthermore, current findings suggest that the indirect predictive effect of demandingness on the symptoms of depression via global evaluation of self and awfulizing beliefs differs depending on the level of non-awfulizing and unconditional self-acceptance beliefs for women. Non-awfulizing beliefs function as a protective factor against the indirect predictive effect of demandingness on depressive symptoms via awfulizing beliefs for the total sample. We discussed the potential theoretical and clinical implications in detail.
vorige artikel Rational Emotive Family Health Therapy for Reducing Parenting Stress in Families of Children with Autism Spectrum Disorders: A Group Randomized Control Study 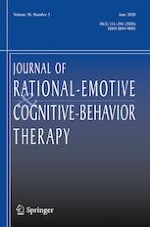 Affective and Cognitive Correlates of the Frequency of Using the Verb “to be”: An Empirical Test of E-Prime Theory

How Can Stoic Philosophy Inspire Psychosocial Genetic Counseling Practice? An Introduction and Exploration

Concepts of Metacognition in the Treatment of Patients with Mental Disorders