Dispositional mindfulness (DM) has emerged as an important mental health factor. DM contains many dimensions; however, each dimension’s specific role and the mechanisms through which they contribute toward health are not yet clear. Therefore, this study’s primary goal is to examine whether DM dimensions attenuate the association between stress and internalizing/externalizing problems in adolescents.

The study involved a sample of 737 participants (51.2% girls) aged from 12 to 18 years. They completed measures of five dimensions of mindfulness, stressors, and psychological symptoms (somatic complaints, anxious/depressed, attention problems, aggressive behavior, and rule-breaking behavior) at the beginning of the study, and the latter (measures of psychological symptoms) were completed again at a 6-month follow-up.

All increased DM dimensions, except non-reactivity and non-judging, were found to predict fewer psychological problems over time, with acting with awareness being especially prominent (p = .02). Increased describing and non-judging were found to attenuate positive associations between stress and symptoms (p = .03), whereas observing increased this association (p < .05). Moreover, an interaction between DM dimensions emerged, increased non-judging predicted less internalizing and externalizing symptoms in youth with higher levels of acting with awareness (p = .02).

Future intervention studies could include techniques to improve the capacity for acting with awareness, and the inclusion of techniques aimed at enhancing other dimensions should be conditioned by the nature of the psychological problems that are being targeted in each intervention.

Titel
Dispositional Mindfulness and Its Moderating Role in the Predictive Association Between Stressors and Psychological Symptoms in Adolescents
Auteurs:
Nerea Cortazar
Esther Calvete 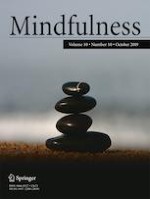 What Makes Mindfulness-Based Interventions Effective? An Examination of Common Components

Compassion in the Treatment for Chronic Pain: an Ethical Imperative with Neurobiological Effects

Mindfulness, Nonattachment, and the Feeling-Action Relationship