Much is known about the effect of parent–child relationships on child health; less is known about how parent–child relationships influence parent health. To assess the association between aspects of the parent–child relationship and parent metabolic outcomes, and whether these associations are moderated by parent gender. Five metabolic outcomes (systolic and diastolic blood pressure, heart rate, total cholesterol and glycated hemoglobin) were assessed among 261 parents (45.83 ± 5.50 years) of an adolescent child (14.57 ± 1.072 years). Parents completed questionnaires assessing their child’s hassles and the quality of their days with their child. Parents’ perceptions of their child’s hassles were associated with parent heart rate (B = 2.954, SE = 1.267, p = 0.021) and cholesterol (B = 0.028, SE = 0.011, p = 0.010), such that greater perceived child hassles were associated with higher heart rate and cholesterol levels, on average. These associations were not moderated by parent gender (all ps > 0.30). Parent report of their day with their child was not associated with parent metabolic outcomes (all ps > 0.20). Parent gender moderated the association between parent report of their day with their child and parent systolic blood pressure (B = 13.861, SE = 6.200, p = 0.026), such that less positive reports were associated with higher blood pressure readings among fathers, but not mothers. This study suggests that parent metabolic health may in part be influenced by aspects of the parent–child relationship.
vorige artikel The relationship between indoor tanning and body mass index, physical activity, or dietary practices: a systematic review
volgende artikel The combination of health anxiety and somatic symptoms: a prospective predictor of healthcare usage in primary care 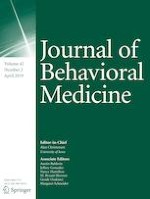 Can the artificial intelligence technique of reinforcement learning use continuously-monitored digital data to optimize treatment for weight loss?

The association between symptoms of generalized anxiety disorder and appointment adherence, overnight hospitalization, and emergency department/urgent care visits among adults living with HIV enrolled in care