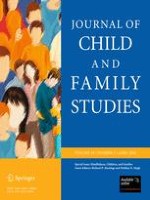 Mindful Parenting: A Call for Research

Mindfulness-Based Approaches with Children and Adolescents: A Preliminary Review of Current Research in an Emergent Field