“To Forgive is to be Sane and Realistic”: Contributions of REBT to the Psychology of Forgiving | mijn-bsl Skip to main content
TOOLBAR 1 2 3 4
ZOEKEN MENU 1 2 3 4

Over the last 20 years, literature on the psychology of forgiving has burgeoned. Despite this, forgiveness literature from the rational-emotive behavior therapy (REBT) perspective has been rare. This is unfortunate, given the elegance of the REBT model and that Ellis touched favorably upon forgiving as far back as 1961. The REBT model is dialogued with the works of Enright and Fitzgibbons (Helping clients forgive. American Psychological Association, Washington, 2000; Forgiveness therapy. American Psychological Association, Washington, 2015) with reference to others. Among recommendations are: (1) using and researching REBT regarding forgiveness; (2) focusing on unforgiveness-reduction when clients cannot contemplate forgiving; (3) recognizing an “Acceptance continuum” of healthy responses from “non-forgiving” to “forgiving”; (4) considering use of REBT with combined unforgiveness and trauma, as well as exploring parallels between the two phenomena; (5) giving primacy to “Unconditional Self Acceptance (followed by Unconditional Life and Other Acceptance); and (6) complementing forgiveness outcomes studies with phenomenological research. The author concurs with Ellis and Harper (A guide to rational living. Wilshire Book Co., Hollywood, 1973/1961) that: “To err is human; to forgive is to be sane and realistic” (p. 111).

Titel
“To Forgive is to be Sane and Realistic”: Contributions of REBT to the Psychology of Forgiving
Auteur:
Milo Milburn 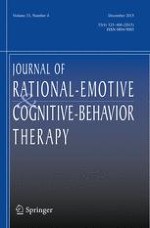 Assumptions and Conclusions: Fundamental Distinctions Between Tibetan Buddhist and Western Approaches to Happiness