This work is an international collaborative effort and involved a critical assessment of the literature.

Three main predicaments were identified. First, the formal definitions of response shift need further specification and clarification. Second, previous models were focused on explaining change in the construct intended to be measured rather than explaining the construct at multiple time points and neglected the importance of using at least two time points to investigate response shift. Third, extant models do not explicitly distinguish the measure from the construct. Here we define response shift as an effect occurring whenever observed change (e.g., change in patient-reported outcome measures (PROM) scores) is not fully explained by target change (i.e., change in the construct intended to be measured). The revised model distinguishes the measure (e.g., PROM) from the underlying target construct (e.g., quality of life) at two time points. The major plausible paths are delineated, and the underlying assumptions of this model are explicated.

It is our hope that this refined definition and model are useful in the further development of response shift theory. The model with its explicit list of assumptions and hypothesized relationships lends itself for critical, empirical examination. Future studies are needed to empirically test the assumptions and hypothesized relationships.
vorige artikel Response shift in results of patient-reported outcome measures: a commentary to The Response Shift—in Sync Working Group initiative
volgende artikel Correction to: Response shift in patient-reported outcomes: definition, theory, and a revised model 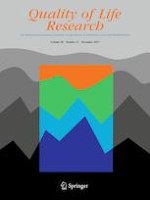 Correction to: Response shift in patient-reported outcomes: definition, theory, and a revised model