Exposure to a natural disaster can have a myriad of significant and adverse psychological consequences. Children have been identified as a particularly vulnerable population being uniquely susceptible to post-disaster psychological morbidity, including post-traumatic stress disorder (PTSD). Without effective intervention, the impact of natural disasters on children’s developmental trajectory can be detrimental, however, research is yet to find evidence to definitively establish the comparative efficacy or unequivocal superiority of any specific psychological intervention. A scoping review was undertaken according to the Preferred Reporting Items extension for Scoping Reviews Guidelines (PRISMA-ScR), to evaluate the current research regarding psychological interventions for children (below 18 years of age) experiencing PTSD after exposure to natural disasters, a single incident trauma. Fifteen studies involving 1337 children were included in the review. Overall, psychological interventions, irrespective of type, were associated with statistically significant and sustained reductions in PTSD symptomatology across all symptom clusters. However, whilst evidence supported the general efficacy of psychological interventions in this population, the majority of studies were considered retrospective field research designed in response to the urgent need for clinical service in the aftermath of a natural disaster. Consequently, studies were largely limited by environmental and resource constraints and marked by methodological flaws resulting in diverse and highly heterogeneous data. As such, definitive conclusions regarding the treatment efficacy of specific psychological interventions, and furthermore their ameliorative contributions constituting the necessary mechanisms of change remains largely speculative. As natural disasters can have a catastrophic impact on human lives, establishing levels of evidence for the efficacy of different psychological interventions for children represents a global public health priority.
volgende artikel Advancing Our Understanding of the Risk Factors Associated with Crossover Youth in the Child Welfare and Juvenile Justice Systems: A Trauma-Informed Research Agenda 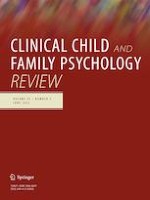 Advancing Our Understanding of the Risk Factors Associated with Crossover Youth in the Child Welfare and Juvenile Justice Systems: A Trauma-Informed Research Agenda

Effects of Brief Interventions on Internalizing Symptoms and Substance Use in Youth: A Systematic Review

Integrating Objective and Subjective Social Class to Advance Our Understanding of Externalizing Problem Behavior in Children and Adolescents: A Conceptual Review and Model

Effect of Parenting Interventions on Perinatal Depression and Implications for Infant Developmental Outcomes: A Systematic Review and Meta-Analysis