» Naar de samenvatting
Belangrijke opmerkingen
While the data speak for themselves, their voices are very quiet and you have to listen carefully. F. Mosteller Research is like acting. You do it because you can’t help yourself. B. Underdown

The moral(s) of these happy and sad stories 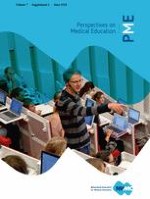 Sometimes determination and compromise thwart success: lessons learned from an effort to study copying and pasting in the electronic medical record

They didn’t cover this in lecture: The formation and dissolution of the patient-provider relationship

Simulation-based education: what’s it all about?