Fatigue is frequent and often severe and disabling in RA, and there is no consensus on how to measure it. We used online surveys and in-person interviews to evaluate PROMIS Fatigue 7a and 8a short forms (SFs) in people with RA.

We recruited people with RA from an online patient community (n = 200) and three academic medical centers (n = 84) in the US. Participants completed both SFs then rated the comprehensiveness and comprehensibility of the items to their fatigue experience. Cognitive debriefing of items was conducted in a subset of 32 clinic patients. Descriptive statistics were calculated, and associations were evaluated using Pearson and Spearman correlation coefficients.

Mean SF scores were similar (p ≥ .61) among clinic patients reflecting mild fatigue (i.e., 54.5–55.9), but were significantly higher (p < .001) in online participants. SF Fatigue scores correlated highly (r ≥ 0.82; p < .000) and moderately with patient assessments of disease activity (r ≥ 0.62; p = .000). Most (70–92%) reported that the items “completely” or “mostly” reflected their experience. Almost all (≥ 94%) could distinguish general fatigue from RA fatigue. Most (≥ 85%) rated individual items questions as “somewhat” or “very relevant” to their fatigue experience, averaged their fatigue over the past 7 days (58%), and rated fatigue impact versus severity (72 vs. 19%). 99% rated fatigue as an important symptom they considered when deciding how well their current treatment was controlling their RA.

Results suggest that items in the single-score PROMIS Fatigue SFs demonstrate content validity and can adequately capture the wide range of fatigue experiences of people with RA. 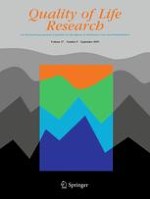 The association between physical activity, fitness and body mass index on mental well-being and quality of life in adolescents

The impact of axial spondyloarthritis on quality of life (QoL): a comparison with the impact of moderate to end-stage chronic kidney disease on QoL