Beyond the Class Norm: Bullying Behavior of Popular Adolescents and its Relation to Peer Acceptance and Rejection | mijn-bsl Skip to main content
TOOLBAR 1 2 3 4
ZOEKEN MENU 1 2 3 4

» Naar de samenvatting
Research on peer relations has demonstrated that acceptance or rejection of behaviors varies in accordance with the behavioral norm in the peer group or classroom (e.g., Boivin et al. 1995; Chang 2004; DeRosier et al. 1994; Jackson et al. 2006; Sentse et al. 2007; Stormshak et al. 1999). In most of these studies, researchers drew on the person-group dissimilarity model of Wright et al. ( 1986). This model postulates that negative social behaviors like aggression are more likely to lead to negative peer evaluations when these behaviors are not normative (infrequent) in the peer context. That is, children will be rejected when their behavior is dissimilar to that in their peer group context (they deviate from the group norm), but not if they display behavior similar to that of their peers.
These studies have, however, neglected differences in influence reflected by adolescents’ reputation-based status in the peer group. Adolescents with a high-status position among peers have more power and the ability to exert influence upon their peers directly or indirectly (Adler and Adler 1995, 1998; DeBruyn and Cillessen 2006; LaFontana and Cillessen 2002; Lease et al. 2002; Parkhurst and Hopmeyer 1998). In view of their influential position among peers, it seems reasonable to suggest that involvement of popular adolescents in certain behaviors might affect the class norm and, consequently, the acceptance and rejection of behavior.
In the present study, we examined the interplay between the class norm and status. The role of status was incorporated in the original person-group dissimilarity model to explain the diffuse relation of negative behavior (here: bullying) with peer acceptance and peer rejection. We would like to investigate whether it is not the class norm as expressed by the mean level of behavior of all peers but rather the mean level of behavior of popular adolescents that accounts for the behavioral norm effect. This implies that the class norm might actually be a popularity norm. In the following we elaborate on the way behavior of popular adolescents is related to the class-norm.

The central question was; Why and in what way are the class norm and popularity norm related to how behavior is evaluated by peers? To answer this question, we used a goal-framing approach in which goals of adolescents were taken as a starting point (Lindenberg 2001, 2006). Goals are important for what people pay attention to, and the way people evaluate and judge the behavior and characteristics of others. The idea that goals govern people’s attention to and evaluation of behavior is directly applicable to peer relations (Dijkstra et al. 2007; Veenstra et al. 2007). That is, behaviors and characteristics that facilitate goal pursuit are liked, whereas goal-thwarting behaviors are disliked (Ferguson and Bargh 2004; Heidgerken et al. 2004, Newcomb et al. 1993; Rubin et al. 2006).
An important goal for adolescents is to establish relations with peers and to gain a sense of belonging within the peer group (Baumeister and Leary 1995; Berndt 1979, 1982; Coleman 1961; Corsaro and Eder 1990; Hartup 1992; Parker and Asher 1987; Rubin et al. 2006; Sullivan 1953). In the light of the importance of goals for cognitive and emotional processes, it is not surprising that being rejected has been found to have detrimental effects on the mental and social development of adolescents, and that it puts them at risk for later social and mental maladjustment (Gifford-Smith and Brownell 2003; Kupersmidt and Coie 1990; Oldehinkel et al. 2007; Parker and Asher 1987; Rubin et al. 2006).
The way bullying is linked to the goal pursuit of adolescents and, consequently, to peer acceptance and rejection is not straightforward. Adolescents strive not only for belongingness, but also for status (Buhrmester 1990; Jarvinen and Nichols 1996; Ojanen et al. 2005). Bullying is often negative for the victim. But for the perpetrator and the onlookers, who may even provide assistance or approval (Salmivalli et al. 1996), bullying may help to improve their own status. As a result, bullying can be expected to lose at least part of its negative evaluation, and may even add to being accepted.
This status effect is especially likely when popular peers are involved in bullying. For adolescents, imitating popular others is an attractive means of elevating their own status. Bullying has been found to be related to popularity both cross-sectionally (DeBruyn and Cillessen 2006; Dijkstra et al. 2008; Lease et al. 2002) and longitudinally (Cillessen and Borch 2006). Imitation of successful peers can lead to reflected glory, and enhances the person’s own status (Cialdini and Richardson 1980; Erdogan 1999). Moreover, imitation increases the chances of affiliation with popular adolescents and being part of the popular clique, which is considered attractive for adolescents (Adler and Adler 1995, 1998; Eder 1985; Merten 1997).
In view of these considerations, we expected that it would be particularly bullying by popular adolescents rather than the overall class norm that was related to the evaluation of bullying behavior by peers. This means that the class-norm effect found in previous studies is actually a popularity-norm effect. Thus, we hypothesized that individual bullying would be less negatively related to peer acceptance when popular adolescents were involved in bullying. Conversely, we expected that the positive effect of individual bullying on peer rejection would be weakened by bullying behavior of popular adolescents.
To test our hypothesis, we first examined whether the impact of bullying on acceptance and rejection by peers is influenced by the class norm of bullying (class-norm effect). Subsequently, this class norm is split into bullying behavior of popular adolescents (popularity-norm) and bullying behavior of non-popular adolescents (non-popularity-norm). We additionally investigated the extent to which the bullying behavior of popular adolescents as well as bullying behavior of non-popular adolescents affects acceptance and rejection of bullying behavior.

In the current study, we used cross-sectional data from a larger cohort study, TRAILS (TRacking Adolescents’ Individual Lives Survey). TRAILS is a prospective cohort study of Dutch preadolescents who will be measured biennially until they are at least 25 years old. TRAILS is designed to chart and explain the development of mental health and social development from preadolescence into adulthood. The TRAILS target sample involved pre-adolescents living in five municipalities in the north of the Netherlands, including both urban and rural areas (De Winter et al. 2005). During the second wave of data collection, a subsample of peer nominations was collected from both TRAILS participants and their classmates. This subsample was used in the present study.
Peer nominations were assessed in classes with at least three regular TRAILS participants. Schools provided the names of classmates of TRAILS participants. All eligible students then received an information letter for themselves and their parents, in which they were asked to participate. If students or their parents wished to refrain from participation, they were requested to send a reply card within 10 days. In total, 98 students, of whom three regular TRAILS participants, refused to participate. Approximately two weeks after the information letter had been sent, a TRAILS staff member visited the selected school classes to assess the peer nominations. The assessment of the peer nominations lasted about 15 min and took place during regular lessons. Peer nominations were assessed in a total of 172 classes in 34 schools in the first year (72 school classes) and second year (100 school classes) of secondary education, which is comparable with the 7th and 8th grade in middle school in the United States. The school classes were almost equally divided among levels of education: low education (60 school classes), middle education (53 school classes), and high education (59 school classes). In total, 3,312 students (1,675 boys, 1,637 girls), including 1,007 regular TRAILS participants, filled out the questionnaire and nominated their classmates (mean age = 14.02, SD = 0.73). Each classroom had 7 to 30 participating pupils ( M = 18.39; SD = 5.99). The subsample consisted of 87.3% Caucasian, 0.5% Turkish, 0.6% Moroccan, 1.7% Surinamese, 1.2% Antillean/Aruban, 2.5% Indonesian, and 4.1% other ethnic origin. For 2% of the participating students, information about their ethnic origin was unavailable. All measures in the present study were based on peer nominations from this subsample. Respondents could nominate an unlimited number of same-sex and cross-sex classmates in their responses to all questions.

This study has some limitations that should be considered. First, the data used in the study were cross-sectional, so that causal statements are not appropriate. However, in view of the aim of the study, that is, to examine the extent to which bullying was differently evaluated by peers dependent on the class norm or the involvement of popular peers in bullying, this limitation does not jeopardize our results. Still, we need to consider an alternative explanation that popular adolescents do not set the norm, but behave according to the class norm, which, in turn, leads to their popularity. In that sense, popular adolescents do not set the norm but follow it. Although longitudinal data are necessary to test this alternative approach, results of our study make this explanation rather implausible. We found that the mean level of bullying behavior of popular adolescents was much higher than the overall level in the class. This seems to suggest that the class level is to a large extent based on bullying behavior of popular adolescents. Thus, without the contribution of popular adolescents to bullying the class level would be much lower. The idea that popular adolescents follow the norm would not imply such large differences in level of bullying, but more similar levels.
Second, the data used in our study stem from peer nominations only, which might lead to problems regarding shared method variance. For the study of peer relations, however, the use of peer nominations is probably one of the most valid and reliable methods of disentangling the association between behaviors and peer relations (Bukowski et al. 1993; Bukowski and Hoza 1989).
Third, our study was built upon the differences between popular adolescents and non-popular adolescents. Although it could be argued that these decisions were rather arbitrary, it appeared that the number of popular adolescents was rather low. As a consequence, we think we included only those adolescents who were very popular. This reduced the number of so-called “false positives”, that is, the “unjustified” inclusion of some as popular adolescents. We feel it is safe to say, therefore, that the status of adolescents influences the evaluation, judgment, and appreciation of behavior by peers.
The important lesson from these findings is that the way behavior is judged and evaluated by peers is particularly dependent on who is involved rather than the overall level of behavior within the classroom. The findings show that the norm in the class is to a large extent set by popular adolescents. Future researchers might do well to further address the role of popular adolescents in how peers value, judge, and evaluate negative behaviors.

This research is part of the TRacking Adolescents’ Individual Lives Survey (TRAILS). Participating centers of TRAILS include various departments of the University Medical Center and University of Groningen, the Erasmus University Medical Center Rotterdam, the University of Utrecht, the Radboud Medical Center Nijmegen, and the Trimbos Institute, all in the Netherlands. Principal investigators are prof. dr. J. Ormel (University Medical Center Groningen) and prof. dr. F.C. Verhulst (Erasmus University Medical Center). TRAILS has been financially supported by various grants from the Netherlands Organization for Scientific Research NWO (Medical Research Council program grant GB-MW 940-38-011; ZonMW Brainpower grant 100-001-004; ZonMw Risk Behavior and Dependence grants 60-60600-98-018 and 60-60600-97-118; ZonMw Culture and Health grant 261-98-710; Social Sciences Council medium-sized investment grants GB-MaGW 480-01-006 and GB-MaGW 480-07-001; Social Sciences Council project grants GB-MaGW 457-03-018, GB-MaGW 452-04-314, an GB-MaGW 452-06-004; NWO large-sized investment grant 175.010.2003.005); the Sophia Foundation for Medical Research (projects 301 and 393), the Dutch Ministry of Justice (WODC), and the participating universities. We are grateful to all adolescents, their parents and teachers who participated in this research and to everyone who worked on this project and made it possible. Further, we would like to thank Gijs Huitsing, Katya Ivanova, Anke Munniksma, Miranda Sentse, and Jelle Sijtsema, as well as the reviewers for their helpful comments on earlier drafts of this paper. An earlier version of this study was presented at the Educational Research Days (Onderwijs Research Dagen (ORD), Groningen, the Netherlands, June 2007. 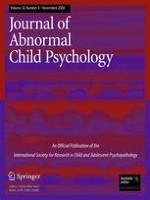