In Western society, there has been a history of perceiving adolescence as a time of “storm and stress,” during which youth may go through heightened negative experiences such as conflict with parents, disengagement from school, and emotional dysfunction. Despite increasing attention to positive youth development, such negative stereotypes of adolescence may be held by youth themselves, which undermine their behavioral and neural development. However, youth’s stereotypes of teen emotionality in particular (i.e., beliefs that teens typically experience greater emotionality than younger children) and the role of such stereotypes in youth’s emotional functioning have not been examined. This longitudinal study investigated the reciprocal relations between youth’s negative stereotypes of teen emotionality and their emotional functioning (i.e., emotional expressivity and emotion regulation) in Hong Kong and Mainland China, two regions in China sharing Chinese cultural traditions but differing in the extent of exposure to Western influence (N = 1269; 55% girls; M age = 12.86 years). Although youth in Hong Kong saw the teen years as a time of heightened emotionality more than did their counterparts in Mainland China, such stereotypes predicted youth’s greater emotional expressivity and less emotion regulation over the 7th grade in both regions. Moreover, in both regions, youth’s negative expressivity reciprocally predicted their stronger stereotypes of teen emotionality over time. Taken together, these findings demonstrate the role of youth’s stereotypes of teen emotionality in shaping their emotional expressivity and emotion regulation during early adolescence, and also the role of youth’s negative expressivity in reinforcing their stereotypes. Moreover, these findings highlight the relevance of the Western-popularized perception of adolescence as a time of “storm and stress” in non-Western regions in a world of increasing globalization and societal change. 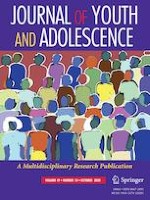 Effects of School-based Multicomponent Positive Psychology Interventions on Well-being and Distress in Adolescents: A Systematic Review and Meta-analysis

Profiles and Transitions of Dual-Factor Mental Health among Chinese Early Adolescents: The Predictive Roles of Perceived Psychological Need Satisfaction and Stress in School

Exposure to Multiple Forms of Bias Victimization on Youth and Young Adults: Relationships with Trauma Symptomatology and Social Support