The study of conflict processes often focuses on the manner in which disagreements are resolved, such that relationship deterioration is a product of the failure to negotiate. However, conflict management tactics may not be the most salient feature of parent–adolescent conflicts because these relationships are obligatory, with power unevenly distributed, and negotiated resolutions unanticipated. Instead, parent–adolescent relationships may be more sensitive to the affective tenor of the interchange than the manner in which the dispute is resolved. In two studies, we examined the premise that relationship damage arising from disagreements between mothers and adolescent children is a product of negative affect and failure to compromise. Concurrent analyses involved reports from 101 (33 boys, 68 girls) adolescents (M = 13.89 years old) about conflict with mothers. Longitudinal analyses involved reports from 271 (112 boys, 159 girls) adolescents (M = 11.6 years old at the outset) about conflict with mothers at two time points 1 year apart. Compromise and youth negative affect were moderately correlated; when both were included as predictors of adverse relationship consequences arising from conflict, negative affect accounted for almost all of the variance, concurrently and prospectively. Scholars and practitioners who advise families that negotiated resolutions to disagreements help to avoid relationship disruption may be discouraged in their efforts unless a similar emphasis is placed on minimizing negative affect. 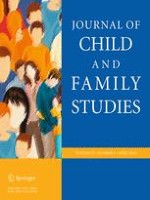 Associations Between Attachment Narratives and Self-Report Measures of Attachment in Middle Childhood: Extending Evidence for the Validity of the Child Attachment Interview

What Parents Do When Children are Good: Parent Reports of Strategies for Reinforcing Early Childhood Prosocial Behaviors

A Comparative Policy Analysis of Family Preservation Programs in the U.S. and in Taiwan