Lesbian, gay, and bisexual (LGB) adolescents often report compromised relations with their families. Given the recent changes in societal attitudes toward LGB individuals, in respect to rights for marriage and other legal statuses, we explore whether or not there has been a change in how LGB and heterosexual adolescents perceive their family relations over time.

Using the British Columbia Adolescent Health Survey from British Columbia, Canada (N = 99,373; Mage = 14.8), we investigated the trends and disparities in family connectedness and mother/father support in four data sets from 1998 to 2013.

We found that while levels of perceived family connectedness and parent support have increased for heterosexual adolescents since 1998, the same increases were not found for LGB adolescents. Among LGB participants, levels of perceived connectedness/support generally decreased in each survey wave, especially among females. Alarmingly, significant disparities in these perceptions remained for LGB youth over time.

Our findings have implications for supportive interventions focused on LGB adolescents and their families and in particular, the role of father support.
vorige artikel National Survey of Juvenile Community Supervision Agency Practices and Caregiver Involvement in Behavioral Health Treatment
volgende artikel Expanding and Extending the Role Reversal Construct in Early Childhood 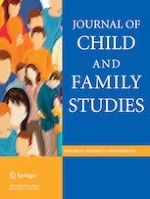 Perceived Stress and Life Satisfaction: A Multiple Mediation Model of Self-control and Rumination

Military Posttraumatic Stress Disorder: A Qualitative Systematic Review of the Experience of Families, Parents and Children

Expanding and Extending the Role Reversal Construct in Early Childhood