Preventive health behaviors are believed to be motivated in part by a person’s perception of risk for a particular health problem. Risk contains a cognitive component, beliefs about the chances of a health problem occurring, and an affective component, fear or worry about the health problem. Although both have been shown to influence behavior, the nature of their interrelation as an influence on behavior has not been examined. Data from the 2005 Health Information National Trends Survey, a US nationally-representative telephone survey was analyzed. Participants reported perceived absolute and comparative risk for skin cancer, feelings of worry about skin cancer, and sunscreen use behavior. Analyses examined main effects models for the relation between perceived risk, worry, and sunscreen use, as well as both moderated and mediated models. For both absolute and comparative risk, the relation between cognitively-based perceived risk for skin cancer and sunscreen use was fully mediated by feelings of worry, as evidenced by significant direct effects of worry (bs > 0.046, ps < 0.01) and indirect effects of risk through worry (bs > 0.19, ps < 0.01). When worry was included in the models, direct effects of risk perceptions were non-significant (bs < 0.11, ps < 0.10). No evidence was found for moderated effects of worry on the relation between risk and behavior. While cognitive risk appraisals do influence decision making and may be addressed by interventions, these findings demonstrate that affectively-based risk components play a key role in behavior regulation. Affectively-based risk might be an effective target for interventions and should be incorporated more fully in decision-making models. 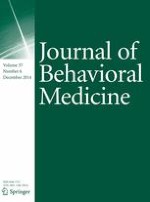 Pre-drinking and alcohol-related harm in undergraduates: the influence of explicit motives and implicit alcohol identity

Chronic pain and cardiovascular stress responses in a general population: the Tromsø Study

Effects of a 12-week endurance training program on the physiological response to psychosocial stress in men: a randomized controlled trial