Social problems are a prevalent feature of ADHD and reflect a major source of functional impairment for these children. The current study examined the impact of working memory deficits on parent- and teacher-reported social problems in a sample of children with ADHD and typically developing boys (N = 39). Bootstrapped, bias-corrected mediation analyses revealed that the impact of working memory deficits on social problems is primarily indirect. That is, impaired social interactions in children with ADHD reflect, to a significant extent, the behavioral outcome of being unable to maintain a focus of attention on information within working memory while simultaneously dividing attention among multiple, on-going events and social cues occurring within the environment. Central executive deficits impacted social problems through both inattentive and impulsive-hyperactive symptoms, whereas the subsidiary phonological and visuospatial storage/rehearsal systems demonstrated a more limited yet distinct relationship with children’s social problems. 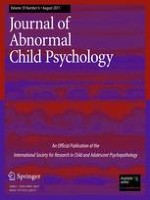 Erratum to: Emotional Dynamics in the Development of Early Adolescent Psychopathology: A One-Year Longitudinal Study

The Children’s Yale-Brown Obsessive Compulsive Scale: Reliability and Validity for Use Among 5 to 8 Year Olds with Obsessive-Compulsive Disorder

Association of ADAM10 and CAMK2A Polymorphisms with Conduct Disorder: Evidence from Family-Based Studies