Medical communication across languages is gaining attention as the multilingual character of local, regional, and national populations across the world continues to grow. Effectively communicating with patients involves not only learning medical terminology, but also understanding the community’s linguistic practices, and gaining the ability to explain health concepts in patient-centered language. Language concordance between physicians and patients improves patient outcomes, but methods to teach communication skills for physicians are usually limited to the majority or official language. For example, in U.S. medical schools increased demand for physician skills in other languages, such as Spanish, has resulted in renewed academic discourse about best practices in teaching practical communication skills for physicians. In language education, translanguaging is an approach that integrates and validates multilingual individuals’ real use of language, which often includes non-standard words, regionalisms, and mixed influences from multiple languages, such as Spanglish or Chinglish. Efforts to improve medical language concordance by teaching a second language to medical students would benefit from an understanding of patient-centered communication strategies, such as is supported by translanguaging. Teaching effective communication skills to physicians should evolve and engage with the fluid linguistic attributes of culturally and linguistically diverse patient populations. In this eye opener, we first introduce the translanguaging perspective as an approach that can increase attention to patient-centered communication, which often includes spontaneous practices that transcend the traditional boundaries of named languages, and then present examples of how translanguaging can be implemented in medical education in order to sustainably enhance equity-minded patient-accessible medical communication.

Expressing health-related concepts in ways that transcend or disregard normative language boundaries is common in multilingual, multicultural environments. Take, for example, Spanish-speaking United States (U.S.) patients who may use what are typically perceived as ‘English technical terms’ that have acquired popular usage in the community, such as /em-ar-ái/ for MRI, or /re-fíl/ for medication refill. Relatedly, when giving instructions in Spanish regarding not drinking from a straw when recovering from a tonsillectomy, the doctor may explain the importance of not using a “popote” /po-po-teh/ to her Mexican patient, a “pajilla” /pa-hí-yah/ to her Nicaraguan patient, or a “cañita” /ka-nyí-tah/ to her Peruvian patient. When the post-tonsillectomy patient is a twelve-year-old who is part of a family where the parents prefer (mostly) Spanish for communication but the patient prefers (mostly) English, the doctor tells the patient not to use a “straw” while using the regional Spanish equivalent “pitillo” /pi-tí-yoh/ when explaining these instructions to her Colombian parents. These cases illustrate that effectively communicating with patients involves not only learning accurate monolingual medical terminology, but also gaining an understanding of community linguistic practices and preferences [1]. These emergent (bottom-up) linguistic practices, however, do not typically find a way into language courses for medical purposes, as they are deemed to fall outside of professional discourse. By not recognizing these practices, medical educators may leave out much more than vocabulary items: they ignore the presence and communication needs of local multilingual communities.
Currently, medical communication in languages other than English is gaining attention as the multilingual character of our society continues to grow. For example, in the U.S. context, the Spanish-speaking community is the largest minority language group [2], while in Australia, Chinese speakers are the largest group with 2.5% Mandarin and 1.2% Cantonese speakers [3], and Turkish speakers form the largest immigrant linguistic group in Germany [4]. Reflecting the super-diversity of the Western world, an increasing body of evidence demonstrates that medical language concordance improves patient outcomes and satisfaction [5] and, in places like the U.S., federal law mandates equitable provision of care for patients regardless of national origin or language preference [6]. Furthermore, U.S. medical schools are tasked by the Liaison Committee on Medical Education with teaching physicians to communicate with patients, including core content standards of communication and interpersonal skills and cultural competency [7].
The fluid nature of language generates variability in vocabulary and pronunciation as dialectal, cross-cultural, and cross-linguistic influences [8] operate across levels, even in presumably language concordant encounters (e.g., English-speaking physician and patient) [9]. Even interpreter-mediated encounters, in which a professional interpreter is present throughout the medical interaction and may help to bridge a potential language discordance between physician and patient, the words that are interpreted are only useful insofar as they are truly understood by the patient [9‐11]. Considering the above, strategies to teach effective communication skills to physicians and health professionals should evolve and engage with the fluid linguistic attributes of diverse patient populations. It has further been suggested that effectively teaching medical communication skills in diverse languages will require interdisciplinary collaboration among language professionals, such as linguists/language professors, interpreters/translators, and medical experts, such as physicians and medical educators [1, 12, 13]. To do this, we draw on the translanguaging perspective and argue for its inclusion in medical education settings—such as clinical skills training and medical second language courses—in order to sustainably enhance patient-accessible medical communication skills.

Given the ever-changing landscape of language, the community itself can serve as a rich source of linguistic knowledge. Medical students, particularly heritage speakers who may have acquired multilingual skills in their homes [8], are themselves members of the community at large prior to becoming medical professionals. Exploring the possibilities of translanguaging in medical education settings can be viewed as an opportunity to engage community members and heritage language speakers in the professional medical community as ambassadors of their day-to-day linguistic practices that can enhance accessible patient-physician communication both in general clinical skills training and in language-specific courses (e.g. medical Spanish). Future studies should evaluate the incorporation of course elements that impact language concordant communication beyond medical terminology alone, such as regionalisms, cultural concepts, and observed communication skills assessment.
The perspective presented herein goes beyond the teaching of (foreign/second) languages for medical purposes; it emphasizes the multilingual speaker’s experience as worthy of inclusion in spaces in which it has traditionally been excluded, such as professional academic discourse [21]. In doing so, translanguaging acknowledges multilingual/multidialectal practices as communicatively full and valid [22]. It serves as a call to action for medical educators, physicians, and trainees to re-evaluate effective strategies in communication with patients, to develop self-awareness of limitations, and to avoid a one-size-fits-all approach. Such equity-minded medical communication training can be applied in any language and health professions school not as a skill to be conquered but as a career-long journey to embrace, as students become skillful communicators beyond field-specific registers. Medical translanguaging reminds us to adjust our words and communication styles to respectfully acknowledge individual patients’ histories and the dynamic natures of language and medicine, and in so doing, encourages us to contribute to a push for the inclusion and recognition of subjects whose discursive practices have been historically left out of professional spaces, and the pedagogical pathways leading to such spaces.

P. Ortega and J. Prada declare that they have no competing interests.

Not applicable; please note the cases described in the introductory paragraph are fictional and do not represent actual patients.
Open Access This article is licensed under a Creative Commons Attribution 4.0 International License, which permits use, sharing, adaptation, distribution and reproduction in any medium or format, as long as you give appropriate credit to the original author(s) and the source, provide a link to the Creative Commons licence, and indicate if changes were made. The images or other third party material in this article are included in the article’s Creative Commons licence, unless indicated otherwise in a credit line to the material. If material is not included in the article’s Creative Commons licence and your intended use is not permitted by statutory regulation or exceeds the permitted use, you will need to obtain permission directly from the copyright holder. To view a copy of this licence, visit http://​creativecommons.​org/​licenses/​by/​4.​0/​.
vorige artikel Case presentation methods: a randomized controlled trial of the one-minute preceptor versus SNAPPS in a controlled setting
volgende artikel Mindful medical practice: An innovative core course to prepare medical students for clerkship
insite
INHOUD
share
DELEN 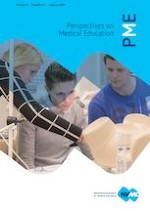 Case presentation methods: a randomized controlled trial of the one-minute preceptor versus SNAPPS in a controlled setting

The organic formation of a wellness committee: A unique, student-led approach to implementing a wellness program in medical school