The goal of this exploratory, within-family, longitudinal study was to examine whether children’s perspectives of the mother-child relationship explained within-family differences in children’s responses to a shared family stressor (maternal depressive symptoms) over time. Children (ages 8 to 15 years; N = 68) residing in 34 families were drawn from a general population study in the UK. Predictor variables were assessed at Time 1 and change in internalizing behavior from Time 1 to Time 2 (2 years later) was examined. As children were nested within families, data were analyzed using multilevel modeling, controlling for previous child behavior. Child perspective of the mother-child relationship, in interaction with maternal depressive symptoms, was found to explain within-family differences in internalizing over time. Children with a negative perspective (compared to mothers’ perspectives) were the most vulnerable to the adverse effects of maternal depressive symptoms.
vorige artikel Examination of the Response Styles Theory in a Community Sample of Young Adolescents 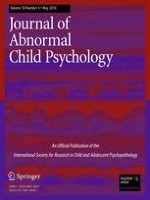 Forms of Aggression, Social-Psychological Adjustment, and Peer Victimization in a Japanese Sample: The Moderating Role of Positive and Negative Friendship Quality