Why Does Positive Mental Health Buffer Against Psychopathology? An Exploratory Study on Self-Compassion as a Resilience Mechanism and Adaptive Emotion Regulation Strategy | mijn-bsl Skip to main content
ZOEKEN MENU 1 2 3 4

The study sample consisted of 349 participants who filled out an online survey conducted between November 2013 and May 2014. Ethical approval for this study was obtained from the Faculty of Behavioral Sciences Ethics Committee at the University of Twente in the Netherlands. Psychology graduate students, earning credits for a course in research methods, recruited participants. All students were instructed to recruit a convenience sample from their personal environment and to select a heterogeneous sample as possible. Individuals interested in participation were sent a unique link by e-mail to the online survey that was programmed in the online survey tool ‘Qualtrics’ (Provo, UT). Of the 349 participants, 64.5 % was female. Mean age of the participants was 32.88 (SD: 12.99), and ranged from 16 to 67 years of age. These and other descriptive characteristics can be found in Table 1.
Table 1
Descriptive characteristics and mean scores on questionnaires for all study participants (n = 349)

The questionnaire included the following instruments:

The Self-Compassion Scale—Short Form (SCS-SF) is a 12-item self-report questionnaire to assess self-compassion (Neff 2003b; Raes et al. 2011). This 12-item version is based on a validated Dutch 24-item version of the SCS (Neff and Vonk 2009) and has good psychometric properties. The SCS-SF includes questions on all components of self-compassion as identified by Neff: Self-kindness, self-judgement, common humanity, isolation, mindfulness, and over-identification. Items are each rated on a seven-point response scale from 1 (‘almost never’) to 7 (‘almost always’). Negatively worded items are mirrored to be able to compute a total self-compassion score, where higher scores indicate more self-compassion (range 12–84). Internal consistency in the present study was α = .81.

The Hospital Anxiety Depression Scale (HADS) is a 14-item screening instrument for the presence of psychopathology in the form of anxiety (7 items) and depressive states (7 items) (Zigmond and Snaith 1983). Participants rate the frequency of feelings over the last week on a scale from 0 (‘not at all’) to 3 (‘very often’). As there is evidence for a strong single dimension of general psychopathology in the HADS (Spinhoven et al. 1997), in this study the total HADS was used with higher scores indicate higher indications for psychopathology (range 0–42). Internal consistency in the present study was α = .83.

The modified Differential Emotions Scale (mDES) is a 16-item measure of state positive (eight items) and negative affective states (eight items) using mood adjectives (Izard 1977; Schaefer et al. 2010). Participants rated the intensity of feelings at the present moment on a scale from 1 (‘not at all’) to 7 (‘very intense’). Exploratory factor analysis (Maximum Likelihood, Varimax rotation) showed a clear two-factor structure consisting of a subscale on state negative and positive affect. For this study only the negative affect items were used. All eight negative mood adjectives (e.g. ‘afraid’, ‘anxious’, ‘angry’, ‘sad’, ‘guilty’) loaded ≥.59 on the first factor measuring state negative affect, and were summed into a total scale. Internal consistency of the scale in the present study was α = .89.

In total, 423 users were logged in Qualtrics. As 74 users did not start the questionnaire (but only, e.g., IP-addresses were logged), these users were removed from further analyses and not treated as participants. This resulted in an actual dataset of 349 participants. All statistical analyses were performed using SPSS 22.0 (IBM SPSS Statistics). First, missing values and outlier analyses were performed. No data was missing for any of the descriptive variables, except for health status and age. For variables containing missing values, on average 4.48 % of data was missing due to inconsistent reporting by participants. In total, 8 % of participants (n = 28) had one or more missing data points. Chi-square and independent t tests revealed that people with a lower age (F = 41.927, p = .000), lower educational level (χ2 = 4.942, p = .026) and who were not married (χ2 = 8.900, p = .003) were significantly more likely to have missing data. Further statistical analyses were controlled for these descriptive variables. Missing data were imputed using the Expectation–Maximization (EM) algorithm (Dempster et al. 1977). Outlier analyses revealed five potential outliers in either HADS (n = 2) or mDES (n = 3). As removal of these outliers did not alter the results of any analyses performed, only results with outliers included will be shown and discussed in the remainder of this article. Hereafter, correlation coefficients were calculated between all questionnaire variables (MHC-SF, SCS-SF, mDES negative affect, HADS) and descriptive variables in the study. First, following an exploratory inspection of frequency distributions, as meaningful and equally distributed two-category dummy variables were created for each descriptive variable: gender [female (1) vs. male], educational level [highly educated (1) vs. other], marital status [married (1) vs. other], employment status [paid work (1) vs. other], religious background [none (1) vs. other], cultural background [Dutch (1) vs. other] and health status [very good (1) vs. other]. To answer both research questions in this study we applied mediator and moderator analyses using the PROCESS macro in SPSS (version 2.10; Hayes 2013). To assess if self-compassion as measured with the SCS-SF mediated the relationship between positive mental health as measured with the MHC-SF and psychopathology as measured with the HADS, we applied a cross-product of coefficients approach using nonparametric bootstrapping procedures (Preacher and Hayes 2004, 2008). In this approach, the cross-product of the coefficient for the relationship between MHC-SF (X) and SCS-SF (M) (the a-path) and the coefficient for the relationship between the SCS-SF (M) and outcome measure HADS (Y) while controlling for X (the b-path) was calculated based on 5000 bootstrapped samples. As can be seen from Fig. 1, this indirect effect (a*b path) is similar to the difference between the total effect (c′-path) and direct effect (c-path) of MHC (X) on HADS (Y). The overall significance of the effect of the a*b path was tested using bias-corrected 95 % confidence intervals (CI). An indirect effect was considered significant when the confidence interval did not include zero. Background dummy variables that correlated significantly with the dependent variable HADS (educational level, work and health status) controlled for in the analysis. To be able to interpret the size of the indirect effect of SCS-SF, κ2 was reported as a recommended standardized measure of effect size, where .01 can be interpreted as small, .09 as medium and .25 as large (Preacher and Kelley 2011).
×
In a second step, to assess if the SCS-SF moderated the relationship between state negative affective states as measured with the mDES and psychopathology as measured with the HADS, linear regression models were applied in PROCESS. First, scores on SCS-SF and mDES were grand mean centered to reduce possible scaling problems and multicollinearity. In the regression models, the HADS score was entered as the dependent variable followed by the centered mDES negative affect and centered SCS-SF scores as independent variables. Also included as an independent variable was an interaction effect between SCS-SF and MDES negative affect. As for the mediation analysis, background dummy variables that correlated significantly with the dependent variable HADS educational level, work and health status) were controlled for in the moderator analysis. Significance tests performed were two-tailed and corresponded with a p < .05. In case this interaction effect was significant, the SCS-SF was interpreted as being a moderator of the relationship between mDES and HADS. A visual representation of a potentially significant interaction effect was given, displaying the relationship between negative affect as measured with the mDES and psychopathology as measured by the HADS for three groups with different levels of self-compassion: one group with mean scores on SCS-SF, and two groups with −1 and +1 standard deviation on SCS-SF, respectively. Also simple slopes for the −1 and +1 SD groups were reported.

This research was conducted in the absence of any commercial or financial relationships that could be construed as a potential conflict of interest for each of the authors.

At the first page of the questionnaire, informed consent was obtained from all individual participants included in the study. All procedures performed in studies involving human participants were in accordance with the ethical standards of the institutional and/or national research committee and with the 1964 Helsinki declaration and its later amendments or comparable ethical standards. Informed consent was obtained from all participants in this study.

No animal studies were carried out by the authors for this article.
Open AccessThis article is distributed under the terms of the Creative Commons Attribution 4.0 International License (http://​creativecommons.​org/​licenses/​by/​4.​0/​), which permits unrestricted use, distribution, and reproduction in any medium, provided you give appropriate credit to the original author(s) and the source, provide a link to the Creative Commons license, and indicate if changes were made.
vorige artikel What Predicts Positive Life Events that Influence the Course of Depression? A Longitudinal Examination of Gratitude and Meaning in Life
volgende artikel Opportunities and Challenges for the Emerging Field of Positive Emotion Regulation: A Commentary on the Special Edition on Positive Emotions and Cognitions in Clinical Psychology
insite
INHOUD
share
DELEN 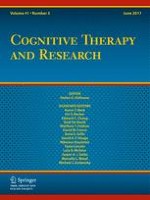 Automaticity of Attentional Bias to Threat in High and Low Worriers

Opportunities and Challenges for the Emerging Field of Positive Emotion Regulation: A Commentary on the Special Edition on Positive Emotions and Cognitions in Clinical Psychology