Self-determination theory (SDT) distinguishes between autonomous and controlled reasons for people’s behavior and essentially states that beneficial effects for individuals’ psychosocial adjustment will accrue when behavior is guided by autonomous (rather than controlled) motives. The present study tested this assumption in the area of adolescents’ identity styles. In a sample of mid-adolescents (N = 247; 53% female), it was found that the motives for using an information-oriented or a normative identity style explained additional variance beyond the identity styles as such in two of the adjustment outcomes examined. Specifically, autonomous motives underlying these two identity styles were positively related to commitment and personal well-being, whereas controlled motives were negatively related to these same adjustment outcomes. Perceived autonomy-supportive parenting was examined as a possible antecedent of the motives behind identity styles. Consistent with hypotheses, it was found that autonomy-supportive parenting was positively related to autonomous motives and negatively to controlled motives underlying identity styles. Implications for future research on the motivational dynamics behind identity development are discussed. 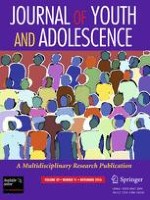 Friendship and Adjustment: A Focus on Mixed-Grade Friendships

Understanding the Link Between Social and Emotional Well-Being and Peer Relations in Early Adolescence: Gender-Specific Predictors of Peer Acceptance

Profiles of a Developmental Asset: Youth Purpose as a Context for Hope and Well-Being

Participating in Sport and Music Activities in Adolescence: The Role of Activity Participation and Motivational Beliefs During Elementary School