Recent research on involuntary autobiographical memories (IAMs) has shown that these memories can be elicited and studied in the laboratory under controlled conditions. Employing a modified version of a vigilance task developed by Schlagman and Kvavilashvili (Mem Cogn 36:920–932, 2008) to elicit IAMs, we investigated the effects of varying the frequency of external cues on the number of IAMs reported. During the vigilance task, participants had to detect an occasional target stimulus (vertical lines) in a constant stream of non-target stimuli (horizontal lines). Participants had to interrupt the task whenever they became aware of any task-unrelated mental contents and to report them. In addition to line patterns, participants were exposed to verbal cues and their frequency was experimentally manipulated in three conditions (frequent cues vs. infrequent cues vs. infrequent cues plus arithmetic operations). We found that, compared to infrequent cues, both conditions with frequent cues and infrequent cues plus arithmetic operations decreased the number of IAMs reported. The comparison between the three experimental conditions suggests that this reduction was due to the greater cognitive load in conditions of frequent cues and infrequent cue plus arithmetic operations. Possible mechanisms involved in this effect and their implications for research on IAMs are discussed. 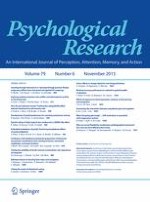 How do you hold your mouse? Tracking the compatibility effect between hand posture and stimulus size

Uncovering the interaction between empathetic pain and cognition

When the going gets tough…: Self-motivation is associated with invigoration and fun

Development of spatial preferences for counting and picture naming

Working-memory performance is related to spatial breadth of attention