Ethnically harassed immigrant youth are at risk for experiencing a wide range of school adjustment problems. However, it is still unclear why and under what conditions experiencing ethnic harassment leads to school adjustment difficulties. To address this limitation in the literature, we examined two important questions. First, we investigated whether self-esteem and/or depressive symptoms would mediate the associations between ethnic harassment and poor school adjustment among immigrant youth. Second, we examined whether immigrant youths’ perception of school context would play a buffering role in the pathways between ethnic harassment and school adjustment difficulties. The sample (n = 330; M age  = 14.07, SD = .90; 49 % girls at T1) was drawn from a longitudinal study in Sweden. The results revealed that experiencing ethnic harassment led to a decrease in immigrant youths’ self-esteem over time, and that youths’ expectations of academic failure increased. Further, youths’ relationships with their teachers and their perceptions of school democracy moderated the mediation processes. Specifically, when youth had poor relationships with their teachers or perceived their school context as less democratic, being exposed to ethnic harassment led to a decrease in their self-esteem. In turn, they reported low school satisfaction and perceived themselves as being unsuccessful in school. Such indirect effects were not observed when youth had high positive relationships with their teachers or perceived their school as offering a democratic environment. These findings highlight the importance of understanding underlying processes and conditions in the examination of the effects of ethnic devaluation experiences in order to reach a more comprehensive understanding of immigrant youths’ school adjustment.

Titel
Why and When is Ethnic Harassment a Risk for Immigrant Adolescents’ School Adjustment? Understanding the Processes and Conditions
Auteurs:
Sevgi Bayram Özdemir
Håkan Stattin 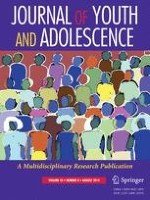 The Intersectionality of Discrimination Attributes and Bullying Among Youth: An Applied Latent Class Analysis

Youth Participation in Organized and Informal Sports Activities Across Childhood and Adolescence: Exploring the Relationships of Motivational Beliefs, Developmental Stage and Gender