When does the Gender Difference in Rumination Begin? Gender and Age Differences in the Use of Rumination by Adolescents | mijn-bsl Skip to main content
TOOLBAR 1 2 3 4
ZOEKEN MENU 1 2 3 4

» Toegang tot de volledige tekst krijgen
Belangrijke opmerkingen
Dr. Paul E. Jose has studied adolescent stress, coping, and adjustment for two decades and is particularly interested in gender differences in these constructs during early and middle adolescence. Dr. Jose is interested in adolescent development broadly conceived, and particularly with how teenagers negotiate the stress and coping process.
Ms. Isobel Brown’s post-graduate research focused on adolescent rumination, and the current report includes findings from her master’s research. She is now employed by government to evaluate policies to assist children and adolescents. Ms. Brown is interested in child and adolescent development and is specifically interested in what government can do to support and encourage optimal development in youth.

Titel
When does the Gender Difference in Rumination Begin? Gender and Age Differences in the Use of Rumination by Adolescents
Auteurs:
Paul E. Jose
Isobel Brown 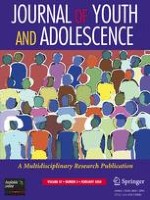 School Adjustment in Rural and Urban Communities: Do Students from “Timbuktu” Differ from Their “City Slicker” Peers?

“Always Use Protection”: Communication Boys Receive About Sex From Parents, Peers, and the Media

The Stability of Political Attitudes and Behaviors across Adolescence and Early Adulthood: A Comparison of Survey Data on Adolescents and Young Adults in Eight Countries