To (i) describe changes in health-related quality of life (HRQoL) pre-operatively, at discharge, and 4 weeks after discharge following open heart surgery, (ii) compare the performance of the EuroQol Questionnaire (EQ-5D 5L) and the Kansas City Cardiomyopathy Questionnaire (KCCQ) against an anchor-based approach, and to (iii) investigate the association between HRQoL and 180-day readmission.

A prospective, consecutive cohort (single-center study) of 291 patients completed the EQ-5D 5L and KCCQ pre-operatively, at discharge and 4 weeks post-discharge. Changes in HRQoL over time were evaluated, and the performance of the instruments was investigated. The association between HRQoL and readmission were investigated with Cox Proportional Hazard models. 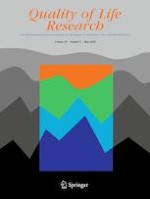 Effects of an exercise program linked to primary care on depression in elderly: fitness as mediator of the improvement

Health-related quality of life in neonates and infants: a conceptual framework

Do the unlabeled response categories of the Minnesota Living with Heart Failure Questionnaire satisfy the monotonicity assumption of simple-summated scoring?

International validation of the EORTC CAT Core: a new adaptive instrument for measuring core quality of life domains in cancer