What Are You Doing With That Object? Comparing the Neural Responses of Action Understanding in Adolescents With and Without Autism | mijn-bsl Skip to main content
TOOLBAR 1 2 3 4
ZOEKEN MENU 1 2 3 4

Understanding another’s actions, including what they are doing and why they are doing it, can be difficult for individuals with autism spectrum disorder (ASD). This understanding is supported by the action observation (AON) and mentalizing (MZN) networks, as well as the superior temporal sulcus. We examined these areas in children with ASD and typically developing controls by having participants view eating and placing actions performed in conventional and unconventional ways while functional magnetic resonance images were collected. We found an effect of action-type, but not conventionality, in both groups, and a between groups difference only when viewing conventional eating actions. Findings suggest there are not global AON/MZN deficits in ASD, and observing unconventional actions may not spontaneously activate the MZN.

Titel
What Are You Doing With That Object? Comparing the Neural Responses of Action Understanding in Adolescents With and Without Autism
Auteurs:
Jennifer J. Pokorny
Naomi V. Hatt
Sally J. Rogers
Susan M. Rivera 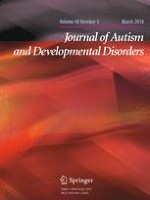 Specific Patterns of Emotion Recognition from Faces in Children with ASD: Results of a Cross-Modal Matching Paradigm