It is widely believed that warm and supportive parenting fosters all kinds of prosocial behaviors in the offspring, including civic engagement. However, accumulating international evidence suggests that the effects of family support on civic engagement may sometimes be negative. To address this apparent controversy, we identified several scenarios for the negative effects of supportive parenting on youth civic engagement and tested them using four waves of data from the Finnish Educational Transitions Studies. They followed 1549 students (55 % female) from late adolescence into young adulthood, included both maternal (n = 231) and offspring reports of parental support, and assessed civic engagement in young adulthood. Control variables included socioeconomic status, other sociodemographic indicators, church belonging, personality traits, and earlier civic engagement. Higher maternal warmth and support and a stronger identification with the parental family in adolescence predicted offspring’s lower political activism up to 10 years later. Perceived parental support in young adulthood predicted lower volunteering 2 years later. There were no significant effects on general organizational involvement (e.g., in student and hobby associations). None of the a priori scenarios that we identified from the literature appeared to explain the pattern of results satisfactorily. We put forth cultural and life stage explanations of our findings. 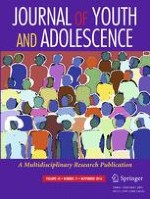 Youth’s Initiations of Civic and Political Discussions in Class: Do Youth’s Perceptions of Teachers’ Behaviors Matter and Why?

The Kids are All Right? Income Inequality and Civic Engagement among Our Nation’s Youth

Participation in Organized Activities Protects Against Adolescents’ Risky Substance Use, Even Beyond Development in Conscientiousness