Growing evidence suggests that orienting visual attention in space can influence the processing of numerical magnitude, with leftward orienting speeding up the processing of small numbers relative to larger ones and the converse for rightward orienting. The manipulation of eye movements is a convenient way to direct visuospatial attention, but several aspects of the complex relationship between eye movements, attention orienting and number processing remain unexplored. In a previous study, we observed that inducing involuntary, reflexive eye movements by means of optokinetic stimulation affected number processing only when numerical magnitude was task relevant (i.e., during magnitude comparison, but not during parity judgment; Ranzini et al., in J Cogn Psychol 27, 459–470, (2015). Here, we investigated whether processing of task-irrelevant numerical magnitude can be modulated by voluntary eye movements, and whether the type of eye movements (smooth pursuit vs. saccades) would influence this interaction. Participants tracked with their gaze a dot while listening to a digit. The numerical task was to indicate whether the digit was odd or even through non-spatial, verbal responses. The dot could move leftward or rightward either continuously, allowing tracking by smooth pursuit eye movements, or in discrete steps across a series of adjacent locations, triggering a sequence of saccades. Both smooth pursuit and saccadic eye movements similarly affected number processing and modulated response times for large numbers as a function of direction of motion. These findings suggest that voluntary eye movements redirect attention in mental number space and highlight that eye movements should play a key factor in the investigation of number–space interactions. 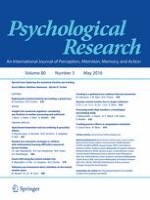 Exploring the numerical mind by eye-tracking: a special issue