Two experiments investigated the effect of visuospatial attention on redundancy gain in simple reaction time tasks. In each trial participants were given a central arrow cue indicating where a stimulus would most likely be presented (i.e., upper or lower half of the display in Experiment 1; left or right half of the display in Experiment 2). Then, a single stimulus or two redundant stimuli could be presented in either expected or unexpected locations. Replicating previous findings, responses were faster when stimuli appeared in expected rather than unexpected locations, and they were also faster when two redundant stimuli were presented than when only one was. Critically, redundancy gain was statistically equivalent for stimuli in expected and unexpected locations, suggesting that the effect of redundancy gain arises after the perceptual processes influenced by the allocation of visuospatial attention.
vorige artikel Top-down influences on attentional capture by color changes
volgende artikel Attention, competition, and the parietal lobes: insights from Balint’s syndrome 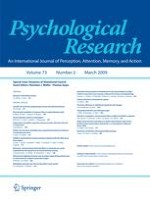 Object-based selection operating on a spatial representation made salient by dimensional segmentation mechanisms: a re-investigation of Egly and Homa (1984)

Misleading contextual cues: How do they affect visual search?