It has been hypothesised that autism is an extreme version of the male brain, caused by high levels of prenatal testosterone (Baron-Cohen 1999). To test this proposal, associations were assessed between three visuo-spatial tasks and prenatal testosterone, indexed in second-to-fourth digit length ratios (2D:4D). The study included children with Autism Spectrum Disorder, ASD (N = 28), and chronological as well as mental age matched typically-developing children (N = 31). While the group with ASD outperformed the control group at Mental Rotation and Figure-Disembedding, these group differences were not related to differences in prenatal testosterone level. Previous findings of an association between Targeting and 2D:4D were replicated in typically-developing children and children with ASD. The implications of these results for the extreme male brain (EMB) theory of autism are discussed.
vorige artikel Episodic and Semantic Autobiographical Memory in Adults with Autism Spectrum Disorders
volgende artikel Diagnostic Validity of Sensory Over-Responsivity: A Review of the Literature and Case Reports 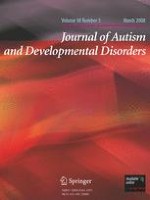 Brief Report: Cross-Cultural Evidence for the Heterogeneity of the Restricted, Repetitive Behaviours and Interests Domain of Autism: A Greek Study