In visual statistical learning (VSL), one can extract and exhibit memory for the statistical regularities of target locations in an incidental manner. The current study examined the development of VSL using the probability cueing paradigm with salient perceptual cues. We also investigated the elicited attention gradient phenomenon in VSL. In a visual search task, the target first appeared more often in one quadrant (i.e., rich) than the other quadrants (i.e., sparse). Then, the participants rotated the screen by 90° and the targets appeared in the four quadrants with equal probabilities. Each quadrant had a unique background color and was, hence, associated with salient perceptual cues. 1st–4th graders and adults participated. All participants showed probability cueing effects to a similar extent. We observed an attention gradient phenomenon, as all participants responded slower to the sparse quadrant that was distant from, rather than the ones that were adjacent to the rich quadrant. In the testing phase, all age groups showed persistent attentional biases based on both egocentric and allocentric perspectives. These findings showed that probability cueing effects may develop early, that perceptual cues can bias attention guidance during VSL for both children and adults, and that VSL can elicit a spaced-based attention gradient phenomenon for children and adults.
vorige artikel Effects of practice on visuo-spatial attention in a wayfinding task
volgende artikel Mental representations of recently learned nested environments 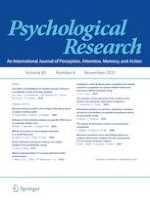 Attentional patterns as emotion regulation strategies during the anticipation of repetitive emotional scenes: an eye-tracker study

An investigation of “We” agency in co-operative joint actions

Monetary incentives have only limited effects on auditory distraction: evidence for the automaticity of cross-modal attention capture

Does attention solve the “apples-and-oranges” problems of judging task difficulty and task order?