This study investigated vicarious effort-based decision-making in 50 adolescents with autism spectrum disorders (ASD) compared to 32 controls using the Effort Expenditure for Rewards Task. Participants made choices to win money for themselves or for another person. When choosing for themselves, the ASD group exhibited relatively similar patterns of effort-based decision-making across reward parameters. However, when choosing for another person, the ASD group demonstrated relatively decreased sensitivity to reward magnitude, particularly in the high magnitude condition. Finally, patterns of responding in the ASD group were related to individual differences in consummatory pleasure capacity. These findings indicate atypical vicarious effort-based decision-making in ASD and more broadly add to the growing body of literature addressing social reward processing deficits in ASD. 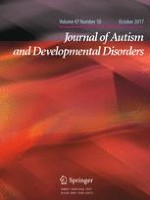 How to Implement Robots in Interventions for Children with Autism? A Co-creation Study Involving People with Autism, Parents and Professionals