Variety is Not the Spice of Life for People with Autism Spectrum Disorders: Frequency Ratings of Central, Variable and Inappropriate Aspects of Common Real-life Events | mijn-bsl Skip to main content
ZOEKEN MENU 1 2 3 4

This study used a novel rating task to investigate whether high-functioning individuals with autism spectrum disorder (ASD) have difficulties distinguishing essential from variable aspects of familiar events. Participants read stories about everyday events and judged how often central, variable, and inappropriate event-components normally occur in this type of situation. The ASD boys made significantly more errors than the typically developing boys in rating the occurrences of variable aspects. In both groups, ratings of variable aspects were age-related, but in the ASD boys, they were also related to theory of mind and weak coherence test scores, and to severity of autistic symptoms. Implications for the understanding of some repetitive behaviours, such as the tendency to adhere to inflexible routines, are discussed.
vorige artikel Health-Related Quality of Life in Children with Autism Spectrum Disorders: Results from the Autism Treatment Network
volgende artikel mRNA and Protein Levels for GABAAα4, α5, β1 and GABABR1 Receptors are Altered in Brains from Subjects with Autism 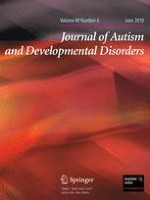 Early Interests and Joint Engagement in Typical Development, Autism, and Down Syndrome

Gary Mayerson: How to Compromise with Your School District Without Compromising Your Child: A Field Guide for Getting Effective Services for Children with Special Needs