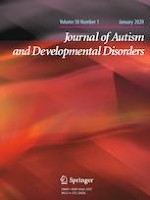 Speech-Language Pathologists’ Knowledge and Consideration of Factors That May Predict, Moderate, and Mediate AAC Outcomes

The Relation Between Autistic Traits, the Degree of Synaesthesia, and Local/Global Visual Perception

Children with an Autism Spectrum Disorder and Their Caregivers: Capturing Health-Related and Care-Related Quality of Life