Engagement in daily valued action is a core component of psychological well-being. Although valued action is a common target of cognitive-behavioral intervention, the degree to which it fluctuates at a daily level—and its predictors—remain relatively untested. Thus, the present daily diary study examined the influence of daily stress and intrapersonal resources such as mindfulness, meaning, and psychological flexibility on valued action among 122 undergraduates. Results of multilevel modeling revealed significant within-and between-person variance in daily valued action, predicted by daily fluctuations in stress as well as average stress across days, dispositional mindfulness, meaning, and psychological flexibility. Intrapersonal resources did not significantly buffer the effects of stress on valued action. Future research should continue to examine valued action in a multilevel framework, given the significant within-person variation in the present study. In the context of clinical interventions, acute stressors experienced outside of session may interfere with valued action. 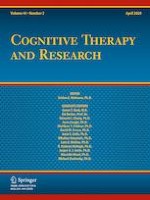 Beliefs About Emotions, Negative Meta-emotions, and Perceived Emotional Control During an Emotionally Salient Situation in Individuals with Emotional Disorders

Identifying the Most Effective Strategies for Improving Autobiographical Memory Specificity and Its Implications for Mental Health Problems: A Meta-analysis