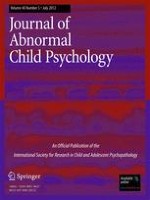 Can Motivation Normalize Working Memory and Task Persistence in Children with Attention-Deficit/Hyperactivity Disorder? The Effects of Money and Computer-Gaming