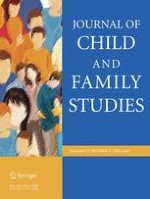 Maternal Depression in Families of Children with ADHD: A Meta-Analysis