The aim of the present study was to examine the psychometric properties of the Youth Psychopathic Traits Inventory (YPI) and of the Youth Psychopathic Traits Inventory – Short version (YPI-S) among Portuguese juvenile delinquents within a forensic sample of 221 incarcerated males (ages 13–20 years). Confirmatory Factor Analysis supported the three-factor structure of the YPI and YPI-S, and the reliability of both instruments was good for the majority of subscales and factors. The YPI and YPI-S and their subscales showed good criterion, external, and divergent validity. That is, positive associations were found with a number of external criteria including Conduct Disorder, crime seriousness, and violent crimes. Total and subscale scores on both YPI versions were positively related to the Antisocial Process Screening Device, the Inventory of Callous-Unemotional Traits, and the Child and Adolescent Taxon Scale. Finally, both the YPI and YPI-S were mostly unrelated to the Social Anxiety Scale for Adolescents. Overall, the YPI-S presented less problems with reliability, but weaker relations to external correlates. These findings justify the use of the YPI and the YPI-S among incarcerated youths. 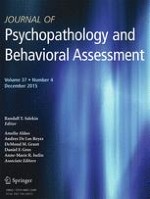 The Revised Child Anxiety and Depression Scale - Parent Version: Extended Applicability and Validity for Use with Younger Youth and Children with Histories of Early-Life Caregiver Neglect

Dyadic Attunement and Physiological Synchrony During Mother-Child Interactions: An Exploratory Study in Children With and Without Externalizing Behavior Problems