Initial CFA using a six-factor measurement model aligned with the original HPLP II, excepting the factor loading of one subsequently excluded item. CFA of the revised 51-item HPLP II yielded a good estimate of fit. Correlations between the revised instrument and the six subscales were acceptable >0.7. The Cronbach’s α coefficient surpassed 0.7 for the revised instrument and six subscales ranged from 0.71 to 0.91. The relationships between the 51-item instrument, perceived health, WHOQOL-BREF domain scores, and demographic variables were also significantly positive.

Healthy lifestyles significantly impact aging and health care expenditure in aging societies. Cross-cultural evidence has shown that healthy practices in earlier life can effectively delay and/or prevent many chronic medical conditions in later life [1]. Women comprise the largest segment of the global elderly population; the maintenance of women’s healthy lifestyles can therefore significantly offset global health spending. Health promotion is particularly important for middle-aged women, because healthy behaviors such as regular exercise and stress management can effectively reduce the severity of physical transitions and health problems [2]. A reliable instrument for the measurement of healthy lifestyles is, therefore, essential to understanding and addressing the health promotion needs of middle-aged women.
The Health-promoting lifestyle profile II (HPLP II) is an instrument that has been widely used to measure health-promoting lifestyles in western healthy populations and clinical disorder groups [3‐5]. A recent paper validated a short-form translated Chinese version of the HPLP II in a general outpatient population [6]. A validation of the Chinese-language version of this instrument among healthy community-dwelling women, however, has not been reported. This study examined the preliminary psychometric properties of the Chinese HPLP II among middle-aged Taiwanese women.

This secondary analysis used cross-sectional data comparing healthy behavior and quality of life (QOL) among caregivers and non-caregivers in Taiwan [7]. The Chinese HPLP II used to measure the participants’ healthy behavior was the primary research instrument in the present study.

The original study included a convenience sample of 137 middle-aged women (39 caregivers, 98 non-caregivers; aged 40–65 years) from urban environments of Tainan city in southern Taiwan. The participants understood Mandarin or the Taiwanese dialect and were recruited in small businesses, such as snack and coffee shops, and public areas, such as traditional markets and supermarkets. The participant details and sampling design of the original study may be found in Lo (2009) [7]. Table 1 presents the demographic characteristics of the sample.
Table 1
Participant characteristics (n = 137)

The original validated English version of the HPLP II is a 52-item instrument that measures health-promoting behaviors on six subscales: health responsibility (HR, nine items), physical activity (PA, eight items), nutrition (N, nine items), spiritual growth (SG, nine items), interpersonal relations (IR, nine items), and stress management (SM, eight items) [8]. Respondents rated the frequency with which they practiced each of the 52 behaviors on a four-point Likert scale (never, sometimes, often, routinely). The total HPLP II score was the mean of all responses to the 52 items.
With permission from the HPLP developers, two bilingual nurse educators at the National Tainan Institute of Nursing translated the English version into Chinese. A blind back-translation was conducted via email by a bilingual Taiwanese Registered Nurse working in the United States [7]. Lo compared the two versions, making minor linguistic revisions and retranslating three SG items. The conceptual and content equivalence of the translated instrument were judged by a professional panel including five bilingual public health nurse educators, using a four-point scale (not relevant, somewhat relevant, relevant, very relevant). All 52 items rated 3 or 4 and were considered to have conceptual and content validity without amendment. A pilot study then assessed the readability and comprehension of the Chinese HPLP II by the target population, using 10 middle-aged non-caregiving women who were not included in the main study. They had no difficulty understanding and completing the instrument. A 2-week test–retest reliability assessment produced Cronbach’s α coefficients exceeding 0.91 for the total score and all subscales [7] (see Appendix A which is the HPLPII Chinese version).

The initial CFA used a six-factor measurement model. It showed alignment with the original version of the HPLP II, excepting the factor loading of item 50 in the nutrition subscale (P = 0.122). This item was excluded from the second CFA, increasing the Cronbach’s α coefficient from 0.71 to 0.73. Since item 50 is insignificant and a reduced model shows better results, we, therefore, excluded this item and keep 51 items in the finalized model. The CFA of the revised 51-item HPLP II yielded a good estimate of fit (χ2 = 4.509, df = 5, P = 0.479, AGFI = 0.956, NFI = 0.991, RMSEA = 0.001). Correlations between the revised HPLP II and the six subscales ranged from 0.74 to 0.87. All factors were significantly loaded on their respective latent factors (0.674–0.846) (Table 2).
Table 2
The six-factor measurement model of the 51-item HPLPII (Standardized parameter estimates based on structural equation modeling)
Fit indices included the likelihood-ratio chi-square (χ2), the adjusted goodness-of-fit index (AGFI), the normed fit index (NFI), and the root mean square error of approximation (RMSEA)
** P < .01; *** P < .001
aReference group with factor loading set to 1.0 in the construct variance to fix the model
All Cronbach’s α values indicated the final instrument’s satisfactory internal consistency (total, 0.95; N, 0.73; PA, 0.91; HR, 0.84; SM, 0.81; IR 0.84; SG, 0.86). All 51 items showed a linear relationship to the corresponding subscales (item-scale correlations ≥0.4).
Criterion-related validity was indicated by significant correlations with concurrent measures of perceived health status and quality of life. The total instrument and perceived health showed a highly significant and fair relationship (r = 0.365, P < 0.001), as did the total instrument and WHOQOL-BREF domain scores (r = 0.359–0.558, P < 0.001). The relationships between the total instrument and financial status (r = 0.337, P < 0.001) and educational level (r = 0.203, P = 0.017) were significant and positive.

This study is to evaluate the psychometric properties of the Chinese HPLP II among Taiwanese women. The six-factor structure of the HPLP II produced by the CFA was consistent with the original HPLP II, excepting one item. This lack of correlation in the nutritional subscale may be due to the small sample size (n = 137). The correlations between the HPLP II, quality of life, and perceived health were similar to those of the original instrument [8]. The internal consistencies of the total HPLP II and its subscales were also similar to those demonstrated by the original version among older adults [4]. Furthermore, the positive relationships we found between the HPLP II, financial status, and educational level are consistent with the results of other studies [9, 11]. However, the correlation with educational level was relatively weak, which may indicate that this factor is not a good measure of healthy lifestyle among Taiwanese women. We thus suggest that future studies of the concurrent validity of the Chinese HPLP II include cognitive-perceptual factors, such as self-efficacy, that independently predict healthy lifestyles [12].
The study is limited by small sample size. However, two studies used Monte Carlo methods to suggest that the minimum subject-to-variables ratio of 5:1 may not be valid for factor analysis [13, 14]. Instead, good factor recovery may be obtained with a small sample size exhibiting high communalities of variables and overdetermination of factors (i.e., a high number of items: number of factors ratio). Barrett and Klines [15] found that a subsample of 112 could recover the original factor structure with 90 variables. MacCallum et al. [13] obtained 100% convergent recovery of population factor structure with a subsample of 60 and 20 variables, while mean communality reached 0.7 and the number-of-items-to-number-of-factors ratio was 20:3. In our study, over half of our sample (137 women, 51 variables) showed high communality (≥0.68). The model also had a reasonably high overdetermination of factors (number of items: number of factors = 51:6). We are thus confident that our sample size was sufficient to build the specified factor structure.
A recent paper by Teng et al. [6] validated a short-form translated Chinese version of the HPLP II among 331 Taiwanese participants recruited from outpatient departments. The health-promoting behaviors in Teng and colleagues’ study may deviate from those of the healthy population, because health status is a situational factor that impacts health-promoting lifestyle activities [16, 17]. Thus, the 52-item HPLP II scale has not been previously validated in a healthy Chinese-Taiwanese population. In addition, Teng et al. included male and female participants, whereas previous studies have documented gender specificity in adult preventive behaviors [18, 19]. Such gender differences may be related to the complication of women’s conceptions of health and healthy behaviors by social expectations, family relationships, life experiences, and menopause [20, 21]. Thus, it is not clear whether the short-form instrument applied among men and women by Teng et al. has been thoroughly validated for the potential gender differences in healthy behaviors. It therefore remains worthwhile to test the validity and reliability of a gender-specific instrument to measure women’s healthy behaviors. While the original HPLP II has been widely used to measure healthy women’s behavior in western society [22, 23], Chinese women have received little attention. It is therefore essential to validate a healthy lifestyle instrument that measures Chinese women’s healthy behavior, which will allow cross-cultural comparison with published results from other populations. From a cultural perspective, the validation of the questionnaire among Chinese women is important, because traditional filial culture requires them to focus on family life [24]; good wives and mothers are expected to provide direct care to older family members and to prepare nutritious and favored family meals. We thus believe that understanding lifestyle patterns among Taiwanese women may provide important information about health promotion needs in their families.
These considerations justify the development and validation of an appropriate questionnaire to examine Chinese women’s lifestyles beyond the findings of the larger study [6] using the same instrument in a general population. Our positive results for the reliability and validity of the Chinese HPLP II provide a foundation for further, larger-scale investigation of this instrument as a culturally appropriate tool to assess the healthy lifestyles of Taiwanese women. The 51-item instrument will be assessed in a larger survey of Chinese women in Taiwan, Hong Kong, and China to further explore its properties. 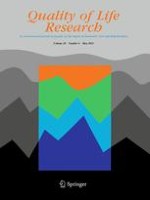 Content identification of the IWQOL-Lite with the International Classification of Functioning, Disability and Health

Quality of life and related variables in patients with ankylosing spondylitis

Risk of malnutrition and health-related quality of life in community-living elderly men and women: The Tromsø study

Applying area-under-the-curve analysis to enhance interpretation of response profiles: an application to sleep quality scores in patients with fibromyalgia