To evaluate the reliability and validity of the EQ-5D in a general population sample in urban China.

Complete data for all EQ-5D dimensions were available for 1,747 respondents (97%). Kappa values were from 0.35 to 1.0. The ICCs of test–retest reliability were 0.53 for the EQ-5D index score and 0.87 for the EQ VAS score. The SEM values were 0.13 (9.22% range) and 4.20 (4.20% range) for the EQ-5D index and EQ VAS scores, respectively. The Pearson’s correlation coefficients between the EQ-5D and the SF-36 were stronger between comparable dimensions than those between less comparable dimensions, demonstrating convergent and discriminant evidence of construct validity. The Chinese EQ-5D distinguished well between known groups: respondents who reported poor general health and chronic diseases had worse HRQoL than those without. Older people, females, people widowed or divorced, and those with a lower socioeconomic status reported poorer HRQoL. Respondents reporting no problems on any EQ-5D dimension had better scores on the SF-36 summary scores than those reporting problems.

The Chinese version of the EQ-5D demonstrated acceptable construct validity and fair to moderate levels of test–retest reliability in an urban general population in China. 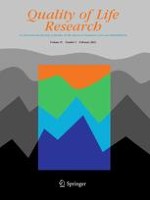 The influence of neighborhood factors on the quality of life of older adults attending New York City senior centers: results from the Health Indicators Project

Mothers of infants with congenital heart defects: well-being from pregnancy through the child’s first six months

Constantly Proving The Opposite? A test of CPTO using a broad time horizon and correcting for discounting