The Distress Tolerance Scale (DTS) and Discomfort Intolerance Scale (DIS) are self-report measures developed for the assessment of emotional and physical distress tolerance, respectively. However, little evidence exists for their construct and specifically criterion-related validity. The current study examined the associations of these self-report measures with lab-based assessments of perceived emotional tolerance and physical discomfort tolerance. Undergraduate participants (N = 166) were administered four film clips intended to induce sadness, disgust, fear, and anger, and a handgrip persistence task intended to elicit physical discomfort. The DTS, but not the DIS, was significantly associated with self-reported emotional tolerance and perceived threat associated with each film after controlling for emotional intensity. Among DTS subscales, the absorption subscale was the only subscale incrementally predictive of negative perceptions of the sad film, the appraisal subscale was incrementally predictive of negative perceptions of the other three films, and little support for the incremental validity of the tolerance and regulation subscales was found. The DTS also incrementally predicted tolerance and perceived threat of film-elicited emotions across films after controlling for anxiety sensitivity. The DIS was only marginally predictive of handgrip task persistence and was unrelated to emotional film perceptions. Overall, these findings uniquely add to the empirical literature on the construct and criterion-related validity of the DTS and DIS.
vorige artikel The Emotional Experience Associated with Worrying in Adolescents
volgende artikel Poor Sleep as a Risk Factor for Nonsuicidal Self-Injury in Adolescent Girls 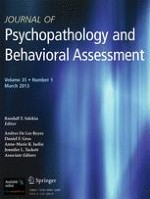