Individuals experiencing a change in health may experience a response shift that may attenuate HRQoL change estimates. The objective of this study was to estimate the proportion of individuals with multiple sclerosis (MS) who experienced a response shift as detected by the Latent Trajectory of Residuals approach.

Participants in the NARCOMS Registry were included if they responded to the general health (GH) question of the SF-12 in at least 3 surveys. Linear growth modeling was used to identify predictors of self-reported GH, and the residuals from this model were used to determine group-based trajectories. Dual trajectories of GH and a measure of disability (PDSS) were used to examine convergence in change patterns over time.

A total of 1,566 individuals were included in this study. The predictive GH model explained 55% of the variance; 99.7% of subjects did not experience a response shift as indicated by flat trajectories, and 0.3% lowered their rating of health as compared to predicted indicating a potential response shift. Among 13% of subjects with flat trajectories of PDDS, 5% had GH decreasing most strongly showing some discordance between symptoms and GH.

A lower percentage of individuals experienced response shift than previous research on smaller samples. These results may indicate the true absence of response shift, or may be limited by using a categorical outcome of GH, and GH predictors that may have also been amenable to response shift, which decreases the appropriateness of using the LTA approach. Future work will include the use of growth curve latent class analyses to assess response shift. 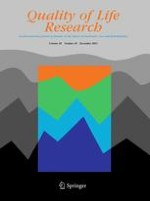 Participation as an outcome measure in psychosocial oncology: content of cancer-specific health-related quality of life instruments

What do people include when they self-rate their health? Differential associations according to health status in community-dwelling older adults

Erratum to: Reliability and validity of the Taiwan (Mandarin Chinese) version of the chronic respiratory questionnaire

Response shift in patients with multiple sclerosis: an application of three statistical techniques