Although Western psychological mindfulness shares many common features with Buddhist mindfulness, subtle differences in the way in which it is practiced and assessed may have important implications. Therefore, the primary goal of this qualitative study was to evaluate the cultural validity of the Five Facet Mindfulness Questionnaire (FFMQ) and Toronto Mindfulness Scale (TMS) by using cognitive interviews among a sample of Buddhist clergy and laypersons to assess their perceptions of these two scales. Participants were 14 Zen Buddhists (seven laypersons, six Zen priests, and one in priest the ordination process) recruited from a monastery in the Pacific Northwestern USA. Each participant completed a cognitive interview using the FFMQ and TMS. We developed a coding schema to identify and categorize participant responses and then applied the final coding framework to all 14 interviews. Results revealed perceived concerns and strengths of each scale, as well as concerns regarding content deemed missing from both scales and general issues related to mindfulness self-assessment. These findings suggest that Buddhist and Western psychological conceptualizations of mindfulness may have important differences.
vorige artikel Spirituality and Intergroup Harmony: Meditation and Racial Prejudice
volgende artikel Meditation Breath Attention Scores (MBAS): Test–Retest Reliability and Sensitivity to Repeated Practice 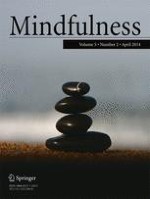 Sowing the Seeds of Mindfulness: Experiences from the Israeli Desert Mindfulness Clinic