To assess the feasibility of using a discrete choice experiment (DCE) to value health states within the QLU-C10D, a utility instrument derived from the QLQ-C30, and to assess clarity, difficulty, and respondent preference between two presentation formats.

We ran a DCE valuation task in an online panel (N = 430). Respondents answered 16 choice pairs; in half of these, differences between dimensions were highlighted, and in the remainder, common dimensions were described in text and differing attributes were tabulated. To simplify the cognitive task, only four of the QLU-C10D’s ten dimensions differed per choice set. We assessed difficulty and clarity of the valuation task with Likert-type scales, and respondents were asked which format they preferred. We analysed the DCE data by format with a conditional logit model and used Chi-squared tests to compare other responses by format. Semi-structured telephone interviews (N = 8) explored respondents’ cognitive approaches to the valuation task.

Four hundred and forty-nine individuals were recruited, 430 completed at least one choice set, and 422/449 (94 %) completed all 16 choice sets. Interviews revealed that respondents found ten domains difficult but manageable, many adopting simplifying heuristics. Results for clarity and difficulty were identical between formats, but the “highlight” format was preferred by 68 % of respondents. Conditional logit parameter estimates were monotonic within domains, suggesting respondents were able to complete the DCE sensibly, yielding valid results.

A DCE valuation task in which only four of the QLU-C10D’s ten dimensions differed in any choice set is feasible for deriving utility weights for the QLU-C10D.
vorige artikel QLU-C10D: a health state classification system for a multi-attribute utility measure based on the EORTC QLQ-C30
volgende artikel Health-related needs of people with multiple chronic diseases: differences and underlying factors 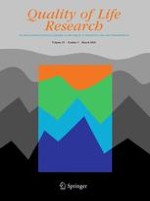 Implementation of the Kids-CAT in clinical settings: a newly developed computer-adaptive test to facilitate the assessment of patient-reported outcomes of children and adolescents in clinical practice in Germany

AmbuFlex: tele-patient-reported outcomes (telePRO) as the basis for follow-up in chronic and malignant diseases