We evaluated audio cuing to facilitate community employment of individuals with autism and intellectual disability. The job required promoting products in retail stores by wearing an air-inflated WalkAround® costume of a popular commercial character. Three adolescents, ages 16–18, were initially trained with video modeling. Audio cuing was then used by an attendant who delivered prompts regarding when to perform job skills. The two interventions were evaluated in an interrupted time series withdrawal design during training and then again in an actual job setting. Results show video modeling was not effective. However, the audio cuing produced job performances well above the designated criteria during training and when on the job. These changes were replicated with each participant, demonstrating clear experimental control. The changes proved statistically significant as well. Participants and parents reported high job satisfaction. The challenges of competitive employment for individuals with autism and intellectual disabilities are discussed.
vorige artikel The Relationship Between Anxiety and Repetitive Behaviours in Autism Spectrum Disorder
volgende artikel Support for a Link Between the Local Processing Bias and Social Deficits in Autism: An Investigation of Embedded Figures Test Performance in Non-Clinical Individuals 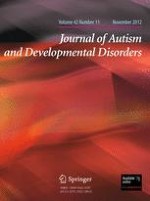 Flexible Visual Processing in Young Adults with Autism: The Effects of Implicit Learning on a Global–Local Task

Temperament and Sensory Features of Children with Autism