Background Most US studies that estimate EQ-5D index score generally apply the UK preference weights. We compared the validity of a newly-developed US weights to the UK weights for use of EQ-5D as a measure of health-related quality of life. Methods Data were collected from a randomized clinical trial for patients with HIV (n = 1,126) in the US. Convergent validity was examined by comparing Pearson correlations of EQ-5D index scores with the MOS-HIV Health Survey scale scores and Physical and Mental Health Summary (PHS, MHS) scores using the US and UK weights. Known-groups validity of EQ-5D US versus UK index scores was compared using clinical variables (CD4+ cell count and HIV viral load), and the MOS-HIV PHS and MHS. Score changes in the EQ-5D index from baseline to week 50 were examined using effect size (ES) estimates. Results The mean EQ-5D index scores was slightly higher using US weights than UK weights (0.87 vs. 0.84, respectively). The correlation coefficient for EQ-5D utilities using the US and UK weights was 0.98. The correlations of EQ-5D index scores with the MOS-HIV scores were moderate and similar using the US and UK weights. The EQ-5D index scores discriminated equally well for both versions between levels of CD4+ count, HIV viral load, and PHS and MHS scores (P < 0.05), suggesting equivalent known-groups validity. The changes in EQ-5D index scores from baseline to week 50 were similar for both versions (ES: 0.21 vs. 0.22 for US and UK, respectively), suggesting equivalent responsiveness to score changes. Conclusions EQ-5D index scores generated using UK and US preference weights showed equivalent psychometric properties. For assessing treatment benefit in a single population, the use of either the UK or US weights as a measure of HRQOL will not change inferences. However, for comparisons across US and UK populations, the choice between these two weights should be based on their relevance to the study population.
vorige artikel Maximizing the value of validation findings to better understand treatment satisfaction issues for diabetes
volgende artikel Health related quality of life in different states of breast cancer 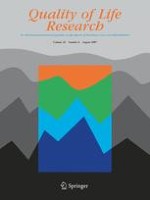 Measurement of overall quality of life in nursing homes through self-report: the role of cognitive impairment